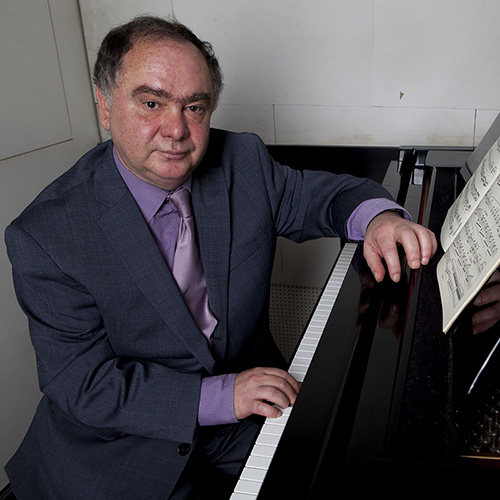 Cesare Gallo was born in Milan in 1959. He began his musical studies at the Conservatory “Giuseppe Verdi”: Piano (Professor Maria Luisa Beech) and composition (M°Alberto Soresina).

Subsequently, he graduated in Band Instrumentation M° Ugo Turriani and Composition M° Angelo Bellisario. He does Postgraduate studies in composition with Salvatore Sciarrino Summer Courses of Città di Castello (1984, 1985, ’88 and 1990) and with Franco Donatoni 1990-1993 Accademia Musicale Superiore di Biella. In 1994, he participated in some courses on contemporary music at the Scuola Civica in Milan and Darmstadt Ferienkurse.

In 1998, he graduated in Electronic Music under the direction of Riccardo Sinigaglia.

A piece for flute and guitar in 1996 was a finalist at the 1st National Festival of Contemporary Music organized by the Municipality of Udine and Edizioni Musicali Taukay.

In 2006, the piano piece “… Ricercare …” was awarded (3rd prize ex aequo) in the Competition of the Val Tidone composition, and in 2013 the same composition was reported to The London Ear Festival Composers’ Competition .

He is present in the Italian Encyclopedia of Contemporary Composers (Pagano Publisher Napoli 1999/2000) and the Data Bank of Composers Italian dell’Amic / Cidim of Rome.

His works are published by Taukay Edition and Map Publishing.

From 1978 Cesare Gallo has stood out for his activities as a teacher and music educator in various Public Schools of Milan.

A self analysis regarding my music

Not to mention the tonal compositions derived from academic studies made with Maestro A. Bellisario, in 1984 begins my true artistic production, just passing by shades to atonality, to a certain mode, the twelve-tone system, and finally to the music d ‘today.
I can say that the predominant idea that has guided my compositional action to date has been that of trying to reconcile personal research with the desire to express and make it elastic and dynamic, linear processes, the musical discourse.
It follows that my compositions have been particularly suffered, without second thoughts, versions, redials, wrong-then discarded copies, and experiments.
I found myself at times to adopt a certain “geometry” of the form to make my dynamic musical discourse, that leaves and goes to a certain direction; But, sometimes, this “geometrization” appeared to me unproductive, and then I holed up in a possibility “forming” of the microcosm, that is, the details, in which sound objects being composed and flaking, or again, transforming into one another, they gave justification to the process goes to a direction: the details of the objects chosen have aimed to make them valuable, and the sample, I tried to get out of the sound you must make “sensitive” and expressive.
Sometimes the kind of relationship I had with my material, was to give a “connotation tell”, or “acting” in an episodic process.
Still, such an attitude free from constraints, I oriented phraseological possibilities, cadential and connotation “dynamic”, as in a certain driving force: my musical discourse, my process ever over-structured, I wanted to make consequential and so I tried to fulfill my material, with its internal ideas, just like in a result that looks after an intake of elegance.
Finally, I thought of leaving in my catalog, certain compositions that relate to the past: this nostalgic operation, steeped in studies of beloved authors, assures me just a certain elegance intake; therefore looks forward to the future, that the materials of the latest music, that the most advanced experiments, can in the new compositions, ensuring the prevailing ideas expressed here above, in a new-found road and defeat the new difficulties of composing .
Milan, April 2013